The Finnish Institute for Health and Welfare THL says there have now been 5,984 confirmed cases of coronavirus in Finland. That’s an increase of 22 from the day before.

There have also now been 271 coronavirus-related deaths in hospitals and other locations like elderly care homes, which is an increase of 4 from the previous day.

Around the country there are 161 patients receiving hospital treatment, all but 22 of them are in the Helsinki and Uusimaa Hospital District. There are 44 people in intensive care, and the number of patients has been leveling off or declining slightly in recent weeks.

MPs outline their visions for a ’green deal’ after crisis

As Finland looks ahead to a period of economic rebuilding and societal recovery after the worst months of the coronavirus crisis, ministers have repeatedly emphasised the importance of ‘green spending’ – making investments in the future that are economically sound.

Three Members of Parliament on the Environment committee outlined their vision for what a green recovery investment programme might look like.

Turku MP Saara-Sofia Sirén (NCP) wants to see more investment in low-carbon transport like a high speed train link from the capital to her constituency in the southwest. ”The construction of a rail link between Helsinki and Turku could be started immediately. EU funding would also be available for this, which Finland should utilize” she says.

Pori MP Petri Huru (Finns) says there might have to be fresh elections, if the government is changing its policy programme substantially with a new focus on the environment. But he’d interested in investments in waterways and private roads, and in positioning Finland as a leader in wood technology. ”I would like to pay special attention to increasing wood construction in both private and public construction. Finland could even be a leader in wood construction throughout Europe. Achieving this goal certainly requires better and more proactive decision-making” Huru explains.

Charity: Bring back Finnish refugees due to coronavirus risk

Save the Children organisation says the government must speed up the repatriation of Finnish children from the al-Hol refugee camp in northern Syria, due to the coronavirus risk.

The charity says an outbreak of Covid-19 at the sprawling camp, home to tens of thousands of displaced people and 7,000 foreign children, would be impossible to manage.

While most refugees live in the main camp, those with connections to Isis fighters – like the 10 Finnish women and their 30 children – live in an annex which Save the Children says makes them “even more vulnerable as they receive less help and support.”

“At the end of last year, Finland made the right policy to repatriate Finnish children from Syria. However, with the exception of two children repatriated immediately in December, implementation of the decision has not progressed” says Anne Haaranen, from Save the Children.

Save the Children says countries like Finland should repatriate the children and their families in accordance with their obligations under the United Nations Convention on the Rights of the Child.

There’s no doubt that coronavirus, and the restrictions imposed to slow the spread of infections around the country, have had a profound impact on the way we live our lives day to day.

One new figure shows just how much things changed during April, when Finns met on average 75% fewer people than normal.

According the results of research carried out by the Finnish Institute for Health and Welfare, the average adult had only 2.5 interpersonal encounters per day during the week of 21st to 25th April.

Compared to a 2005 study which used similar methodology, Finns are meeting far fewer people during the time of coronavirus restrictions – and people who live in Uusimaa had 15% fewer meetings than the rest of the country.

Researchers say this period of isolation has helped stall the spread of the virus.

Despite the ongoing coronavirus pandemic, there hasn’t been any rise in the overall number of people dying in the country according to new figures from Statistics Finland.

Preliminary information shows that deaths during the last week of April were lower than the previous two years: 721 people died in the period 20th to 26th April this year, while the year before the figure was 1,001; and in 2018 the figure was 1,027. 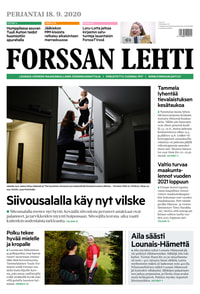